Caring for your boat also means maintaining the boat motor. Here at iboats.com we want to make that process as easy as possible. So, we use simple grids and some schematics to help you get your Mercury Outboard Parts. ... read more All you need to do is select the type of part you are looking for. If you are after an impeller, you select the cooling section. If you are after a starter or power tilt and trim motor, you select the electrical section. We do have some schematic images and OEM parts produced by Quicksilver which Mercury owns. If you need any guidance our friendly customer service team is always willing to help where they can. We can help you find all the Mercury Outboard Parts you need whether it be a repair and service manual, propeller, control cable, or just a motor part.

Mercury has been around a long time. It has seen all the ups and downs the industry has gone through. It started in the Great Depression era in 1939 in Wisconsin. The beginning was just in a simple machine shop and now it is one of the biggest outboard/sterndrive brands in the world. E. Carl Kiekhaefer purchased a manufacturing plant which had several hundred Thor outboards. From there he wanted to improve the design and the rest is history. Mercury says its commitment to quality goes way back to the founder. The company now invokes a mission where the company is led by passionate boaters and customers to give the best propulsion experience on the water. When you own a Mercury motor, you have access to one of the best dealer networks in the industry. Not only that, there are so many outboards you can connect with thousands of other boaters who’ve likely had some of the same experiences you have had. If you want or need that extra help, we strongly suggest using our forums where there is a Mercury section to guide you. read less

If you have a fiberglass or aluminum outboard powered boat, you don't want to feel vibration from your engine at any RPM range. ... read more The more horses you hang on the back of the boat, the more your outboard weighs. The more weight that teeters on a hinge, so it can be trimmed and be tilted, the more engineering that has to go into the design of every component of the engine's transom bracket. At around 455 pounds, the new Merc 150 is "light" for its horsepower. Between you and me, 455 pounds isn't what I'd call "light". I'm not sure how many of my close personal friends and myself it would take to lift 455 pounds but the 150 is lighter than comparable Suzuki, Yamaha or Honda's by 19-23 pounds.

Inside the engine is a very violent place. All those explosions cause the pistons to move along pretty quickly. And they have to come back to get banged on again; and again and again. No matter how good the engineering and manufacturing of the actual engine part of the outboard, there will be some vibration that will escape the block and try to get transmitted to the parts of the outboard that hold it to the back of your vessel. The drive train, from the power head all the way to the propeller tips, also generate some vibration. Engineers work to attenuate (reduce) as much of that vibration all along the system but all those gears meshing together also add to the opportunity for vibration. Modern engines and drives are designed tremendously better than the same horsepower engine from just 15 years ago. Four stroke engines have further advantages in reducing vibration and noise because of the inherent design in an engine that has four instead of two combustion "cycles". 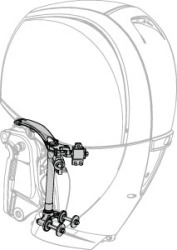 All outboard engineers understand how vibration travels too. The Merc engineers and marketing folks thought about that and came up with a pretty neat name for their engine mounting system. They call it the "Focused Engine Mount" system. Merc could have used an engine mounting system and transom bracket from one of their other outboards. Those designs have held up to dozens of years of real world use on hundreds of thousands of engines and well over 300 horsepower outboards. They've worked just fine. But this is a totally new design all around.
Hidden in the midsection of the engine (the part below the engine block and above the gearcase) is this focused mount system. They're mounted to attenuate the focused forces and vibration of the engine at the key load points. The mounts are also kept from the effects of heat and any dripped oils that could damage or change the characteristics of the rubber in the mounts. The composition of the rubber and how it's fastened to the mounts allows the rubber to be compressed at different rates. At lower RPM's where you're apt to feel more true engine vibration, the rubber is "softer", because it's not as compressed. At higher RPM's when you're up and running it's more compressed and more firm to better hold the engine in line with the boat (that keeps it from wobbling back and forth and helps keep you going straight). 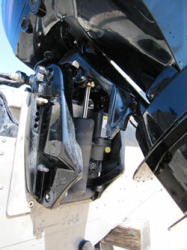 All that is attached to the engine side of the transom bracket which incorporates the trim and tilt hydraulic pump and ram.

On some transom brackets the hydraulic pump is mounted outside the bracket. On the 150, it's inside the bracket, protecting it better and making for a more compact system. Even though this engine weighs in at 455 pounds, it uses a single hydraulic ram for trim and tilt. Some other engine use two shorter rams for the trim and a single longer cylinder for tilt. Again, this makes for a more compact and yes, less costly system.

In this and the two previous articles we've taken a good, introductory look at the new engine. Mercury hasn't told me the pricing yet but it's now available and they have suggested it's going to be more competitive than other makes. That will be important but durability, performance and fuel economy will also play into the engine's total cost. Four stroke's suck less fuel than two cycle engines; they don't have the power curve of a two stroke and durability is an argument I don't want to start but this engine is worthy of consideration when you're shopping for pontoon, fishing or cruising power.

Bill Gius is a three-plus decade marine industry veteran with extensive, hands-on accessory, engine experience. Bill has been working with iboats.com for six years to help manufacturers and dealers use iboats' online marketing, advertising and lead generation services. Bill can be reached at 800-869-1686 x199 or bill@iboats.com. read less

In the November issue of this newsletter we talked about the growth of four-stroke outboard popularity . Four-stroke outboards are the ... read more power of choice for many boats. They are fuel efficient, durable and quiet. Application dictates design and innovation. The pontoon market segment continues to lead boater's choices followed closely by aluminum fishing boats (aka: utility boats). Manufacturers are responding to market demand. 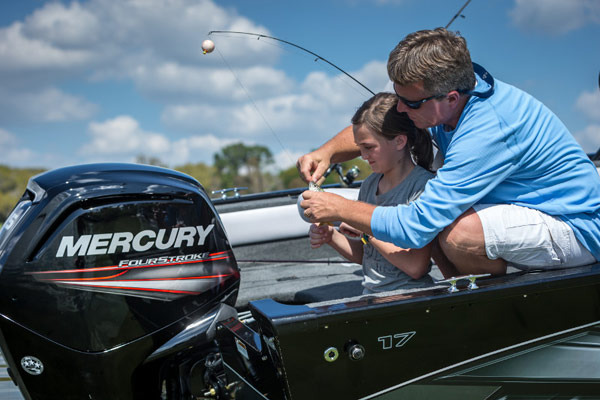 2014 is also the 75th Anniversary of Mercury Marine. For its 75th, Mercury has introduced a new 75hp four stroke outboard as well as a new 90hp and 115hp replacing previous and long-lived two cycle and four stroke series engines. This series of engines represents a significant portion of engine sales for Mercury and all outboard manufacturers.

The new engines feature a 2.1-liter, four-cylinder, eight-valve, single-overhead-cam design. The engines will be available in both helm/remote control and tiller handle models.

Merc engineers worked not only on the new powerhead but also on the lower unit to truly release a new series of product. The new, standard gearcase decreases drag by 15 percent to improve efficiency and performance, thus consuming less fuel and increasing operating range. The new engines also have access to use the optional "Command Thrust" (CT) gearcase.

The CT gearcase models use the same bigger gearcase housing as the recently released Mercury 150 four stroke, but with a gear ratio suited for pontoons and heavier boats. New for the 115hp (no, not the 75 or 90) is a left-hand rotation gearcase for dual-engine installations. More information on their engines is available at: http://www.mercurymarine.com/engines/. 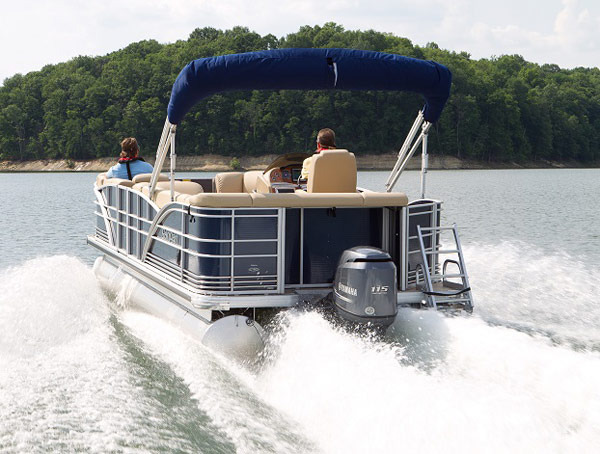